Holton too strong for Wytham.

Holton welcomed Wytham in their third successive home game on a day of sunshine with occasional cloud cover.  Holton were looking for their second win of the season, having narrowly beaten Islip the previous week.  By coincidence the opposition were also aiming for a second win.

For once Guy Burford lost the toss and Wytham chose to field.  John Simpson opened the batting with his fifth partner in six games - this time Guy decided to give it a go himself. 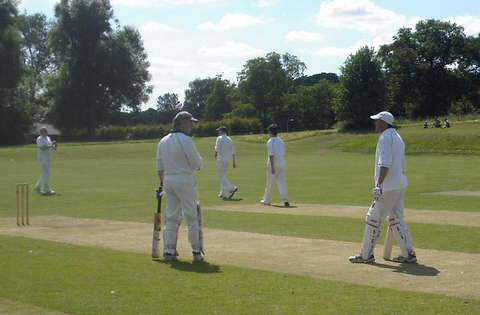 First ball of the game, Anetts should have had John caught, but the keeper dropped a fairly straight forward chance.  Anetts completed a maiden and Guy responded with a boundary off Newman.  After 9 overs, Anetts had in fact completed four maidens out of five and Holton were struggling somewhat at 19 for none off 9 overs on a good wicket.  Then, Newman was replaced by J-P de Rosnay and Guy promptly hit him for two boundaries in his first over to get the Holton score moving.  A few overs later though, de Rosnay had his revenge as Guy was caught for 29 at 44 for 1 with John on 13. 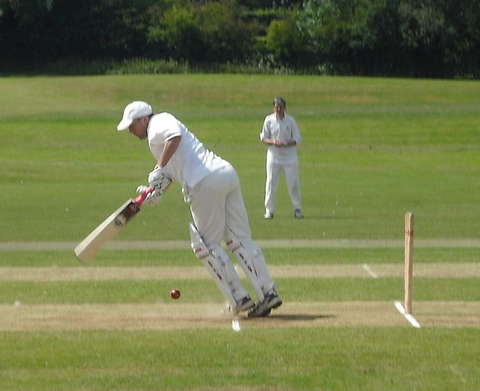 Guy attempts to tickle to leg

Phil Knox replaced Guy and got off to a good start.  He hit a couple of boundaries, but then mistimed one to cover off Hollis and was out for 14 in a partnership of 23.

Phil Knox mistimes one to cover and is caught for 14.

Hugh Kitchin playing only his third game of the season became John's third partner.  After a tentative start, Hugh was soon progressing well with a series of six singles.  That was followed by four successive boundaries and the signs were looking good as a fifty partnership came to fruition.  John too had picked up the pace a little, but at 119, Hugh played a cracking shot, but was unfortunate to be brilliantly caught off the bowling of Blakeman for a well made 25 (119 for 3 off 29 overs).  Meanwhile John was approaching his own fifty. 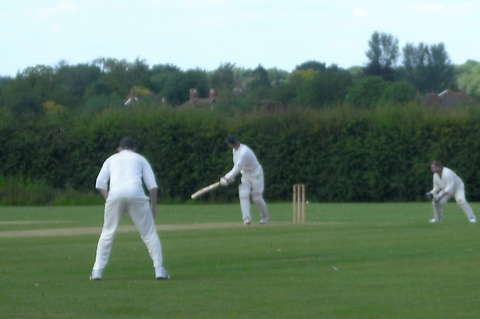 Simon Switala came to the wicket realising that whilst Holton had a good score, the scoring rate overall was not really good enough with only 11 overs remaining of the 40.  Two more overs resulted only a single off each and some twenty/20 was need off the last 9.  Simon duly obliged and played some blistering shots all over the park, whilst John notched up his second fifty in succession.  After six fours, Simon punished Newman in the penultimate over with a spectacular big six over mid wicket and then took a seventh four off Keen in the last over.  The innings closed at a much more respectable 184 for 3, with Simon not out 46 in an unbroken partnership of 65.  John held the innings together with an unbeaten 63. 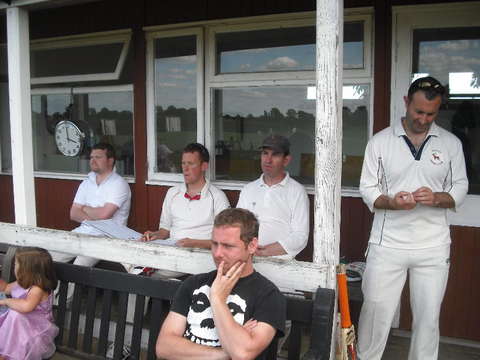 The excitement is just too much for some!
Simon Switala, third from left, back row waiting to bat next.

After tea, the mood in the Holton camp was that 184, whilst not as many as we would have liked (in view of 3 wickets lost), was still a defendable total (4.6 per over), provided our bowling and fielding was positive.

Graham Hawkins and John Kelly opened against A Powell and P Rippon.  After conceding a boundary to Powell off Graham, the openers took a combined 13 from John's first over and Wytham were well underway.  The batsmen continued to dominate the early stages until with the score at 32 in the fifth over, Graham bowled a quick line and length and knocked back Powell's stumps. A key wicket as 185 to win was beginning to look very moderate.

Nevertheless, Rippon didn't seem to be discouraged by the loss of his partner and he pushed the score to 43 off 9, just ahead of the required rate.  Then John Kelly bowled a couple of maidens and the pendulum swung.

Graham Nichols replaced Graham Hawkins and together with John Simpson who replaced John Kelly managed to really put the brakes on.  But Graham H was determined to not to be left out.  Rippon played one out to deep point where Graham H picked up and threw to the keeper to keeper Simon Switala, who had the bails off before P Blakeman could make the single.  The run out decision was made easier because Blakeman unfortunately dropped the bat whilst running it in over a slightly dry and bumpy surface.

John Simpson conceded only singles, but more importantly took 2 more wickets (F Roper and T Hollis), both lbw.  Wytham had slumped from 44 for 2 off 10 to 50 for 4 off 16 and the asking rate had jumped to 5.5

Wyhtams top scorers, Rippon (28) and B Keen (32 not out) were at the wicket, but were now on the defence as Graham Hawkins rejoined the attack.  In the 26th over, John Simpson had Rippon out of his crease and stumped to make the score 69 for 5 (rate an unlikely 7.2).  John Simpson completed his spell of 8 overs with 3 for 14.

Guy Burford came on for Graham Hawkins and promptly completed a wicket maiden by bowling R Coggins.  A couple of overs later, P Newman was caught by Simon Switala resulting in a second wicket maiden for Guy.  At 84 for 7 in the 33rd, it was surely game set and match to Holton (rate over 14!)  Soon after Guy had Hollispack bowled (93 for 8) to finish with figures of 3 for 8 off four overs. 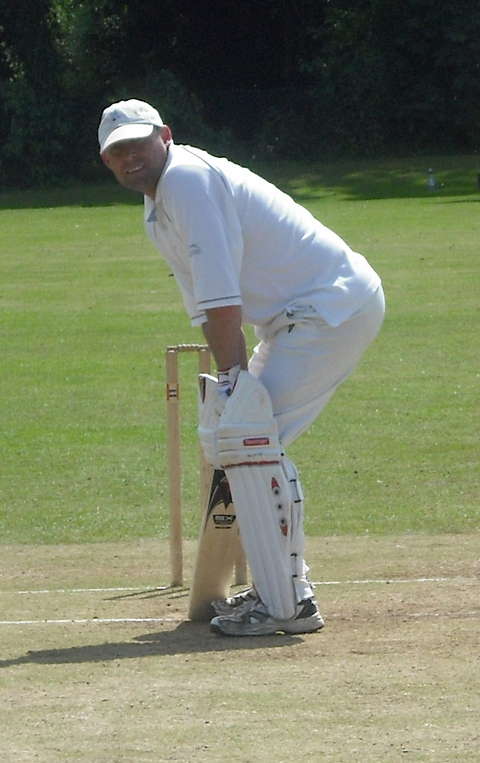 Keen and tailender J-P de Rosnay at least took Wytham past the hundred mark.  Then Alan Banyard coming on for the final four overs had de Rosnay  lbw in the fortieth over as the innings completed at 118 for 9.  Holton had won by a comfortable 66 runs.  Though not as dramatic as the previous victory against Islip, there were celebrations following two successive victories and a sharp upturn in the home side's fortunes.