Holton on top, but can't maintain the pace in winning draw.

Note: the scoebook is somewhat lacking for the Brighstone innings with no details of fall of wickets.  Report will be updated if we can get this information from Brighstone.

For the second season in a row, the Isle of Wight tour began at Brightstone.  On this occasion, we played against the hosts rather than another visiting team.

Guy Burford won the toss and took the field in a time game.  Graham Hawkins opened at the pavilion end and within a few balls of the first over managed to take the edge of opener Stocking with a rising away swinger.  It looked like clearing the infield quite comfortably.   That was until the outstretched right hand of Mark Deacon came across from gulley and took the most amazing catch well over his head.  A definite champagne moment!! 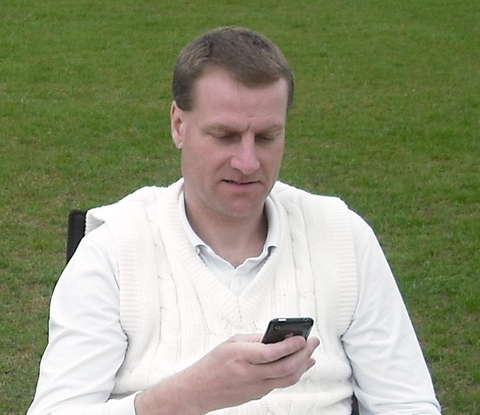 Ben Madden, a guest from Garsington CC took the opposite end and was soon bowling line and length.  The other opener was bowled by Ben for 10 and that was followed quickly in similar fashion by the number four for another duck.  After ten overs, Brighstone were struggling at 33 for 3.

Guy Burford came on next for a short spell, but the Brighstone 4th wicket pair were now progressing well.  Finally, Neil Robinson came on to remove the belligerent Blow for 35 and John Simpson came onto remove Adams for good 46.  Simpson was into a really top class spell of left arm spin and soon had three wickets.  Alan Banyard joined the party with a wicket thanks to a fine catch by Hawkins at mid-on as Brighstone collapsed to (approximately) 130 for 8.

The opportunity was there for Holton, but unfortunately we could remove the tail.  This was mainly due to the batting of Marks, supported ably by M Blow as they took the total towards 200.  At last Madden returned to remove Blow LBW and Simpson completed the job by bowling the number 11.  Brighstone were all out for 199.

We came out after tea thinking 200 was a fairly challenging total and the game could easily go either way.

John Simpson opened with our keeper, Simon Switala.  Simon nudged one to a fielder off Pitman, which brought in Ben Madden at 9 for 1.  Ben upped the pace a bit with three good boundaries and after 6 overs, with some assistance from some wayward deliveries by Pitman (wides and no balls), Holton had progressed to 31 for 1.  Then Ben was bowled and Phil Knox came in and hit 15 before being caught.  Mark Deacon was bowled soon after and Holton were struggling at 55 for 4 in the 18th over.  Fortunately, John Simpson was holding the innings together. 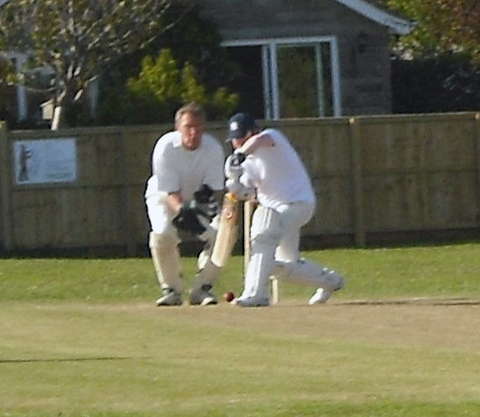 Guy Burford came in as the last batsman with any current form.  Very soon, Guy was playing his shots and Holton were coming back into it.  Guy hit 2 fours and a big six on his way to 36.  Just as it looked that Holton might go on and win the game, Guy was bowled by a yorker from Marks.  Holton were 137 for 5 and 63 were still needed in the remaining 7.5 overs, a tall order.

Club president, David Peddy came in at 7 to join John in the task of ensuring that Holton at least achieved a draw.  David survived half of the remaining overs before becoming another victim of Marks and Alan Banyard and John then took the game safely to its conclusion.  John reached a nice fifty just before the end and his innings effectively ensured that Brighstone could not win the game.

Summary: Holton got into good positions in both innings, however didn't quite have sufficient depth in batting or bowling be able to seriously challenge for victory.  The start of the game was marked by one of the finest catches for some years, taken by Mark Deacon.