After a huge loss against Tetsworth in the previous week, Holton badly wanted to get back to the winning stream. The day looked cloudy but was good enough for cricket.  Cairns Fudge batted first with R Smith and opening the innings. Both the Fudge openers were keen on setting up a foundation for the Fudge. There were no signs of batsmen trying for unorthodox shots, which gave them a strong start. Holton opening bowlers tried their best for a break through but proved to be not enough to test the Fudge openers. Fudge was maintaining a strong run rate and was seemed to be promising to touch 200 mark.

The Holton skipper, Guy Burford, made an interesting change by calling his most experienced bowler Neil into attack. Result was surprising, well set Fudge openers were struggling against top class off break from Neil. Arpit struck first by clean bowling R Smith who tried for a cross bat against a full and straight delivery. At the other end Neil struck twice in no time. Top scorer tried for a late cut against Neil and gave catch to Holton Keeper (Thanks to Simon S for the good catch). Next to go back to pavilion was B Amstrong for a duck (the youngest chap among two teams) who could not predict the top spin from Neil and the ball kissed his middle stump.

Though they were 3 down, it didn’t stop them scoring with a good rate.  Previous Holton star James Race and frustrated Holton a bit. Race and Ragg started building the Fudge innings with a rapid pace. Soon, Kiran and Mahesh replaced Neil and Arpit and Mahesh provided the spell of the day for Holton taking his second 4 wicket haul of the season. Dangerous Race was the 4th man to go (lbw b Mahesh). Kiran kept the attack firm and tight from the other end with his amazing pace. The Fudge attack started collapsing effortlessly. Mahesh sent Bez (c ) and Ragg (b Mahesh) before they could add significantly to the Fudge innings. Andy Small joined O Amstrong and looked in great touch, but he was quite unfortunate to get injured and retired hurt after attempting for a pull on Kiran’s bouncer. Mahesh bowled O Amstrong and Kiran removed M Amstrong. Mark Deacon on loan to Fudge was run out leaving Fudge 127/9 in 27.3 over. 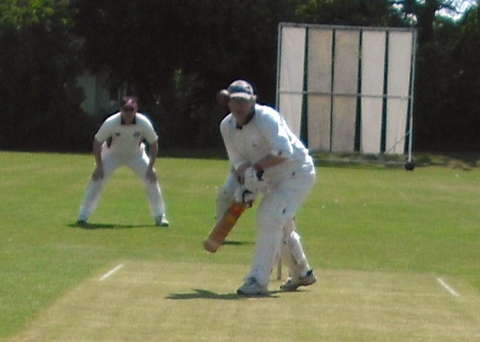 After a short break Holton started the run chase with ten overs before tea. 127 was an easily achievable score for Holton, who had a strong batting line up. Holton effortlessly chased down the target for the loss of 2 wickets. The speciality of Holton innings was the half century from John Simpson(55*). John was in terrific form with the bat and batted throughout the innings with and Alan Banyard both contributing 22 runs each to take Holton towards their 7th Win of the season.   The game finally ended with an unbroken poartnership of 65 between John and Alan.