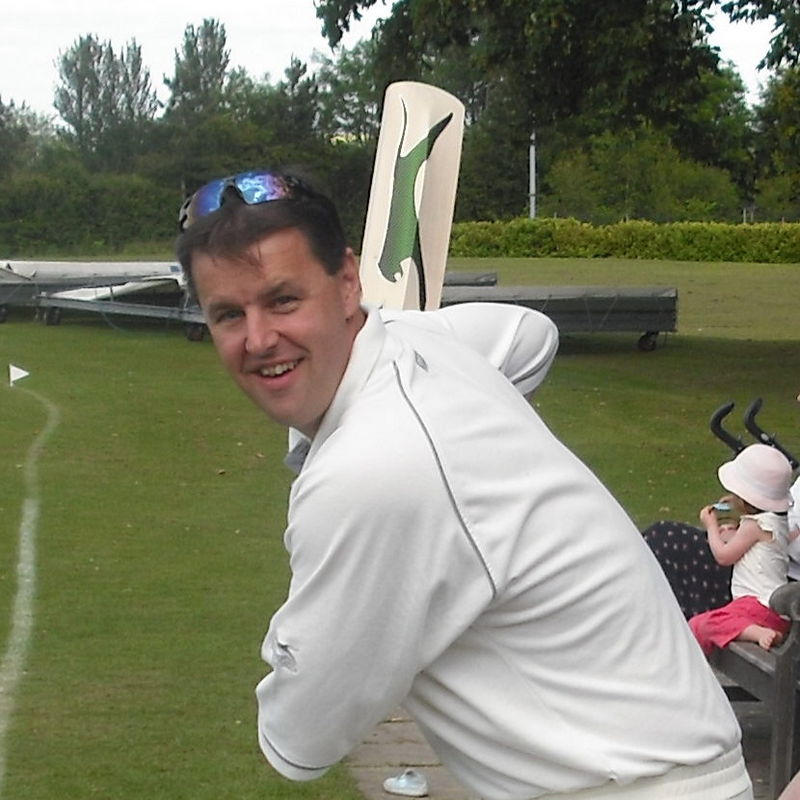 Both teams arrived a little concerned that the game might not actually take place. Persistent showers that morning had thrown the game into doubt. But fear soon gave way to unbridled joy, as the heavens parted and rays of sunshine bathed the small, beautifully manicured ground, in light. However, these feelings were soon tempered, as the aforementioned powerful rays bounced off Hugh Kitchin's bald pate, causing temporary blindness in many and for the rest to shout in unison, "Put a bloody cap on, for Christ’s sake!"

Nichols was captain for the day. Guy Burford, the club captain, a man of many words, though most of them being the onomatopoeic "Hume" and "Good feet for a big man," repeated over and over again at high volume, was unable to make the game. The official reason was that he was "spending time with his family." No, not in the way that every disgraced Tory MP trots out the line, after being court naked in a cupboard, a belt round the neck, a plastic bag over the head and an orange in the mouth. Perish the thought. Rather in Guy's case, "Spending time with the family" just meant, quite simply, "Under the thumb."

The rules for the game were set. 35 overs per side, meaning 7 overs per bowler. Nichols proved to be a fine tosser and won the flick of the coin. It wouldn’t be the last time that day that the words “Nichols” and “Tosser” would be used in the same sentence. Nichols studied the pitch closely before making his decision of what to do next, examining in fine detail the pitch’s topsoil, the amount of grass on the pitch and the temperature allied to moisture in the air and cloud cover, before deciding to bat, as Simon Swatala hadn’t turned up on time because of a bloody football match, meaning there weren’t enough players to bowl.

Kitchin, now thankfully wearing a cap, opened the batting with Simon Robinson. The two men looked steady to begin with, which was surprising considering both had to be separated from copious cans of Stella before the first ball was bowled. The opening bowlers roared in, and were belted all around the ground, before Robinson was caught. Taking his place was another Simon, Simon Littlewood. However, before you could shout, “Don’t hoik a massive haymaker to leg whilst playing across the line,” Littlewood…well, you can fill in the rest yourself.

After a good start, Holton now looked a little rocky at 35 - 2. This didn’t affect Kitchin for one minute. He knew this was his moment. His time had come. Indeed, cometh the hour, cometh the man. Kitchin recited Kipling to himself, as the bowler turned his arm over. “If you can meet with triumph and disaster, And treat those two impostors just the same;” he thought to himself and as a result, mistimed a simple forward defensive and promptly got himself out.

“That was NEVER OUT!” screamed Kitchin, fast proving that Kipling didn’t really know what he was on about, and was far better off making cakes.

Kitchin cast a dejected figure as he slowly trudged back to the pavilion, though of course his mood was soon lifted when he realised how much money he makes being a Virtual Teacher.

Phil Knox took his place and walked out to the middle. He then walked back in again.

Holton were now in deep trouble. Swatala steadied the ship, making 28 runs. He was joined by Binoy Masters.

“Play a steady innings mate; no risks” were his captain’s wise words as he left the pavilion. Masters took guard and swung at everything. Not one shot was from the textbook, but it didn’t matter, as he spanked the ball with great power to all four corners of the ground. The run rate, as a result, went shooting up. Indeed, one of the wily old locals was heard to say, as Masters scored so quickly, “Why, that young man scores at a Simpson-like speed.”

After leaving his crease for the final time, with a fine 43, Master’s top score was badly let down by Nichols who followed him. Nichols prodded at the ball when runs were of the essence, showing no team unity, as it was obvious his batting averages were more important to him than the state of the game. Justice was swiftly served, as Nichols was bowled for 11. Hawkins provided a short cameo, before Holton were all out for 143, 1 ball short of seeing out the 35 overs.

Before the game, Captain Nichols had prepared a rousing, Henry V style speech for his troops, but as he shovelled down more cake during the tea interval, he eschewed his original plans, opting instead for a sprawling rant, blaming everyone but himself for his team’s low score. But his words had an effect. The team’s rookie, one Alan Banyard, realised that this was his time to step up to the plate. He needed to psyche himself up. He did what any man would do in this situation…he went and picked elderberries. Heavy with fruit, Banyard took the new ball. He knew that extra pace and heavy ball he possessed would be tricky for any batsman.

Sprinting in, like a banshee on steroids, Banyard bowled his first ball. The batsman managed to keep it out, but you could see in his eyes the fear that the 17 mph* delivery had caused.

As he bowled his next ball, you could hear a pin drop. Literally, as Banyard had pulled it out of the ball shortly before lobbing the ball towards the now terrified batsman. The ball hit the batsman plumb in front. Banyard leapt a good three feet into the air with his appeal.

“Not Out,” replied the Umpire.

A dejected Banyard started to trudge his way back. However such was the power of this brutish delivery, the ball had kept rolling after hitting the batsman. As a result, and shortly before Banyard had turned having walked all the way back to his bowling mark, the ball clattered into the stumps, sending wood and timber flying in all directions. Justice was served.

After four more balls of Akhtar-like hostility, it was Graham Hawkins’ turn to take over from the other end. There was quite a slope facing Hawkins as he ran in for his first ball. But that did not bother him one jot. He had lost count of the times he had been described as “an uphill bowler who prefers his balls delivered from the pavilion end. “

Hawkins first over produced a wicket too; an unplayable delivery catching the edge and taken behind the stumps by the tardy Swatala. Holton were now on a roll. Kitchin sensed this, and decided to suggest to his Captain a more aggressive field formation.

“Hey Skip,” recommended Kitchin, “What if I go in closer in for the catch?”

“What if you shut up and go back to where I told you, you overpaid pillock” was his Captain’s curt reply.

Kitchin’s mutiny though did not affect the two opening bowlers. Hawkins finished with figures of 7-1-13-3. But it was Banyard’s relentless, machine-gun approach to bowling that took the plaudits. Even he, a modest man at heart, as he bowled out his third victim, stood in the middle of the wicket and performed his now customary Usain Bolt-style celebration.

If Cuxham thought the worst was now over, they were wrong. Holton had another pace-man up their sleeve. Neil Robinson, a right arm quickie in the Jeff Thompson mould, careered in for his first over. Unfortunately, he tripped over his free bus pass on his delivery stride, which had fallen out of his pocket, causing the first ball to be scratched. This only served to fire up Robinson further. With Lillee like intensity, Robinson hurled down his first ball. Hawkeye failed to read its velocity accurately. Sadly though, the batsman faired rather better, and belted it majestically for four.

“Sorry, Skip,” said Robinson, as he prepared for his second ball. “Any suggestions?”

“Err, don’t fuck up,” replied Nichols, now growing into his role as a Captain and showing true leadership characteristics.

Robinson’s second ball was full of incident too. As the ball tore towards the batsman, there was a loud “CRACK!” sound. To a man, we naturally assumed that because of the incredible velocity, the ball had broken the sound barrier. On closer inspection however, and seeing Robinson in a crumpled heap, we realised it was his hip that had given up the ghost.

Robinson bowled four overs for a total of 19 runs.

Replacing Hawkins at the pavilion end was the big hitting Binoy Masters. Complaining of a debilitating shoulder injury before the game, he took the only sensible option, did no warm-ups whatsoever and flung his first ball down with everything he had. Tendons, ligaments, muscles and general sinew could be heard snapping from the other side of . Masters was struggling. He needed something to inspire him to carry on. A challenge. Something to motivate him enough to get through the pain barrier. Like the true pro and sportsman, he found it. Facing him at the other end was a true adversary, somebody worthy of the challenge – a 12 year old boy. Masters didn’t hold back. First ball he tested him with a little chin music.

“He deserved it,” said Masters, when asked about it after the game.

Having set the youngster up, not to mention scaring this child half to death, Master’s second ball took out all three stumps. Teaching the kid a lesson, Master’s cartwheeled away in celebration as if he’d won the Ashes.

“That was a hell of a celebration,” commented Kitchin, who himself very occasionally works with children. “Almost as good as Graham Hawkins’ demolition two weeks ago when he took apart a 10 year-old,” he added.

Holton were now closing in on victory. One wicket remained. In a moment of weakness, and surely for no other reason other than pity, Nichols handed the ball to the financially secure Kitchin.

Kitchin’s bowling technique was poor, in that it started badly, got progressively worse in the middle and the least said about the end the better.  However, with the grace of God - for there could have been no other reason than divine intervention (many are still racking their brains to figure how this could be deserved) - Kitchin took the final wicket.

“I’d like to thank my wife and kids,” said Nichols in his closing speech after the game. “To a degree,” he continued, “I’d like to thank you, the players, for helping me to win this game. Sure, I probably could have done it without you, and for the most part, you made things more difficult; but there is, in there somewhere, heartfelt thanks and gratitude.”

Such a shame there was no-one left to here his oration, as the rest of the team had already left for the pub, leaving Nichols to cycle home on his own.

Note that the opinions given in this report reflect the views of the author and are not necessarily shared by Holton and Wheatley cricket club!  Graham is currently receiving treatment from a psychiatrist and he reports that he should be sober by the start of next season!