Holton Snatch Victory out of the Jaws of Defeat after Fantastic Finish.

After midweek rain and a poor forecast for the weekend, it was a surprise to most that the game was played at all.  In fact, as it turned out, the weather was much better than predicted, the covers had been recently repaired and by 2.30 pm the wicket and outfield were in excellent condition.

Holton were still looking for their first victory of the season; in contrast Islip reported being unbeaten, so this was definitely going to be a challenge.

Guy Buford won the toss in a 40 overs game and put the opposition in to bat.  Once again, Graham Hawkins opened the bowling, this time with John Kelly.  Brian Deeley, well known to many at Holton for run scoring, including a century previously (and being almost as outspoken as GB) opened the scoring with a four off Graham.    After 3 overs, Islip had reached a steady 13 for none and the signs were ominous.  Then John bowled a tidy maiden and Graham followed up with a well pitched up straight one to bowl Brian for 9 (16 for 1).

Epton came to the wicket and proved to be the biggest challenge to the Holton attack.  Whilst opener Desmond rotated the strike, Epton soon showed his prowess with the bat.  Graham Hawkins was replaced at the top end by Graham Nichols and Neil Robinson came on at the other end to bowl his off spinners.  The Islip 2nd wicket pair put on a good fifty, until Desmond top edged high off Neil to short mid wicket.  With the field deep, keeper Simon Switala took the catch comfortably.

A Sri Lankan known as JK and reputed to be a very good bat came in next.  However, in the next over he was a little unfortunate to play on a good ball outside off from Graham Nichols (74 for 3).

Epton continued to progress well as Mat Johnson (in his first game of the season for Holton) came on to bowl.  In his fourth over, Mat had Islip number five out lbw (112 for 4).  This brought together Islips' best two batsmen on the day, Epton and L Price.  They put on a quick fifty, by which time John Simpson had taken over at the spinner's end.  At 162 for 4, Holton were facing a total over 2 hundred.  Then Graham Nichols removed Price (bowled) and John Simpson removed Epton in similar fashion and at 166 for 6 the game had swung back towards the home side.  Epton had scored a brilliant 81 including a dozen boundaries.

Outstanding bowling from John Simpson and Graham Hawkins (returning for a final over), including a low diving catch from Alan Banyard running in from mid wicket, mopped up the tail with all four wickets falling at the same score and Islip were all out for a "gettable" 175. 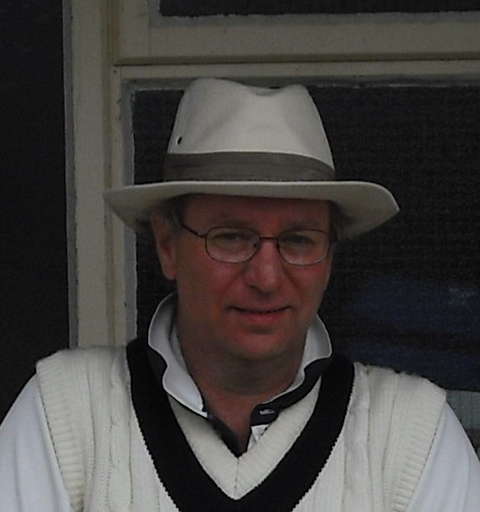 John Simpson, 4 wickets and a fifty

After tea, John Simpson and Phil Knox came out to bat.  Holton needed 176 at 4.4 per over.  John got off the mark with a single second ball, but next ball Phil was caught by keeper Brian Deeley off the bowling of JK.  JK was clearly seeking revenge after failing to score himself and his first spell of four overs produced 1 for 4.  Price at the other end was equally tight and after 8 overs with Matt Johnston now at the wicket, the score was 10 for 1.  The required rate had already jumped up to 5.2.

As Butler took over from JK, the scoring rate began to increase until with the score at 27 in the 11th over, Price had Matt bowled for 12.  The situation was a bit precarious.  Next up was Alan Banyard.  Alan hit a late cut for two off his first ball and upped the rate for a while.  The 50 came up in the 17th over.  Then John Simpson got into gear and started to dominate the scoring until Alan top edged one first ball after drinks off Nelson for 16.  Holton had improved 73 for 3, and the rate required had crept up to 5.4 off 19; still manageable.

Keeper Simon Switala joined John and the score progressed to 90 before Simon was adjudged lbw to Nelson.  Nine runs later and Guy burford was also bowled by Nelson.  Guy has been in such good batting form this season that some felt Holton had lost their chance and when Mark Deacon was out soon afterwards (caught off Epton, he had a good game) it didn't look too good.  Holton were 111 for 6 and still needed another 65 at 6.3.

John Simpson meanwhile was still going well and reached another excellent fifty (eight boundaries), before JK in his second spell finally had him bowled for 54.  (127 for 7, rate needed still a challenging 6.3).

It was now up to the two Grahams, Nichols and Hawkins. Graham N, after a tricky start was now batting beautifully, all be in a difficult situation against tricky bowling (the better bowlers were now on) as Graham H played himself in with four singles.  Confidence in the Islip camp though was high as they felt their bowlers were good enough to mop up the Holton tail.  John Kelly and Neil Robinson were nervously hoping they wouldn't have to come out and bat.

Then, as often happens in tight games, a slightly controversial moment came.  Epton bowled an off side wide yorker length ball, Graham Hawkins played and missed and keeper Brian Deeley took the "catch" and went up along with bowler and several outfielders who had heard a noise.  The umpire (yours truly!) thought for a second and then signaled a wide.  There was daylight between bat and ball, however there had been a sound (bat against ground?).

That was a turning point in the game.  Graham H went on to score a couple of boundaries in his 17 not out and with Graham N still connecting, the rate gradually came down.  Finally, just three runs were needed off the last over and Graham N hit a final boundary to win the game with just four balls to spare.  Graham N hit an unbeaten 36 with four priceless boundaries and Holton had gained their first win of the season.  The final partnership was an unbroken 50, and there were rumours that this could be a Holton record for the 8th wicket partnership.  In fact, I can report that it is the second best since records began and comes second to the tour match at Sampford Peverell on 5 May 2002, when David Peddy and Guy Burford notched up an unbeaten 62.

As the stumps were pulled, Brian Deeley immediately apologised to the umpire for the "controversial" moment.  However, no appology was needed.  The game had been contested in good spirit throughout.  A genuine appeal for a catch had been made and turned down, no attempt had been made to cheat the batsman and if pressure was put on the umpire, it only reflected the tension and excitement of the game situation.

As we retired to the Cricketers pub with Islip, it was reconfirmed that this is always a good fixture, with both sides having their share of success over the years.  John Simpson bought a jug for his fifty, promptly won a bottle of wine on the raffle, so did Brian Deeley and so did ......... Stuart, the landlord of the Cricketers (just what he always wanted!).