Holton post 200 including century opening partnership, but it's not enough.

Day two of the tour, and we moved on to Porchfield, in the north-west sector of the island. Brighstone had told us confidentially that Porchfield was a pretty good club, so we were curious to see how we measured up.
It was a glorious day, and as we arrived at the ground we could see that it was immaculately mown and promised lots of runs. It was going to be another timed game, and the more conservative of us suggested to the skipper, Guy Burford, that we might want to field first – in case we needed to hold out for a draw.
But Guy won the toss and chose to bat. In the end that was the right decision on the day, and we prepared to do battle against what looked like a strong Porchfield side.
For this game Guy put myself and Alan Banyard in to open. Again that turned out to be a good choice. The opening bowlers were both left-arm medium: good, but not unplayable. And we made a good start, with a four in the first over followed by a crashing drive for four by Alan in the second.
Alan was obviously on form, and soon took the lead in the scoring stakes. To the immense frustration of the bowlers he swept freely to the leg and cut blisteringly to the off, with me prodding along in the usual way. After five overs we were on 27-0, before entering a period of consolidation as the bowlers found their line and length.
There was some concern in the pavilion that things were going too slowly, but as the drinks interval approached we had another good over, raising the score to 59-0, with Alan forging ahead on 38 not out and in sight of a maiden fifty for the Club.
Excitement hit fever pitch as in the next over Alan clubbed three fours, leaving us on 71-0 and well set to amass a high total. By now both of us were attempting to push things along, and four overs later we were on 101-0 and Alan had his fifty – to universal cheers and barracking from the bullpen. 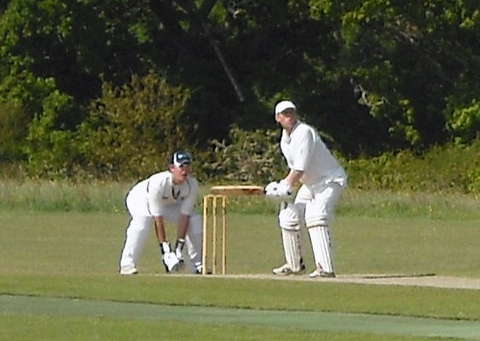 Guy Burford - looking to push the score
At this point Porchfield turned to a spin attack. A twisty county junior came on, and his second ball bamboozled Alan (bowled for a record-breaking 63). Shorn of support I went to a slip catch a couple of overs later (37), heralding a mini-collapse as we slumped from 110-0 to 144-5 in eight overs. Phil Knox was caught for one, Simon Switala started well but was bowled for six, and then Simon Robinson departed after only one ball.

Still 144-5 was not too bad with a handful of overs to spare. At this point Ben Madden and Guy Burford were at the crease, and both started making hay with the bowling. The score rose rapidly and as we approached tea our sixth-wicket partnership was flourishing. Ben hit some beautiful fours, and Guy hammered whatever came his way. With the final four overs yielding 41 runs, we strode in for tea on 200-5, our highest score this season to date. 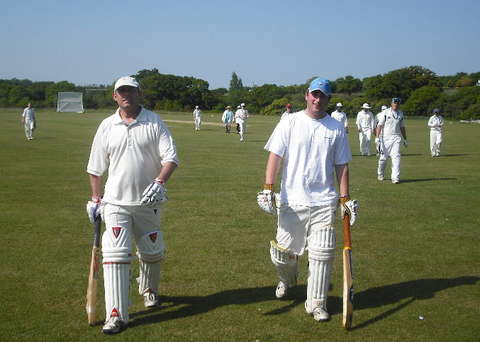 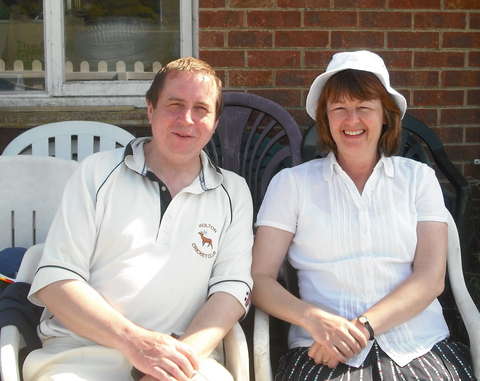 Alan and Petula Banyard relaxing after maiden fifty
Next week we’re back to Oxfordshire for our first home game, against Cairns Fudge. So if you’re not playing, come along to watch and see how we are progressing towards our first win of the season.
John Simpson