This report is written with a few notes taken from the scorebook.  Some more details needed.

Richard Denner won/lost (?) the toss and Chipping Norton batted first.  As I had to go out and field, I handed my camera to a spectator, so had no control over the pictures taken - the better ones are enclosed.

Nigel Walker opened the bowling and bowled two tidy overs for 7.  At the other end, Russ King took the first wicket of the innings (clean bowled) to finish with 1 for 11.  After four overs Chip were (circa) 18 for 1.

At that point Richard brough me on and I quickly had some success thanks to a catch by ?  Raj replaced Russ at the other end. 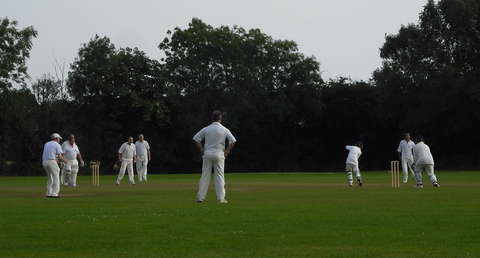 The young Chip' bat defends one from Alan Banyard 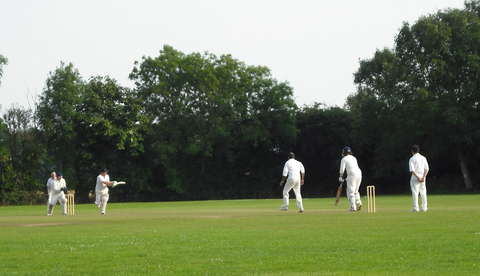 Clip to mid wicket off Raj.

In the interests of sporting twenty20 cricket, Richard then proceeded to give bowling spell to the whole team except the keeper (Chris Tarratt) and himself.  It clearly worked as there were wickets for Nokes, Sean Shannon (2), Dave Williams and young Ben King.  Finally, Richard brought me on for what turned out to be the final over.  I had my second wicket thanks to a stumping by Chris Tarrat and than Chipping Norton's last wicket fell to a run out by ?  It was a key wicket as the man out was top scorer Scottle (35) and meant that the innings closed eight deliveries short of 20 overs. 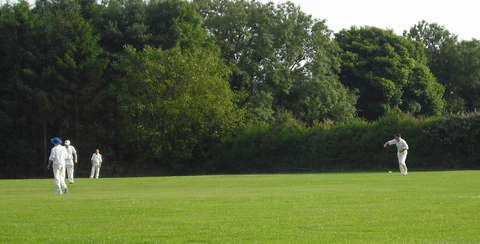 Richard Denner throws one in from the boundary.

? attempts a run out! 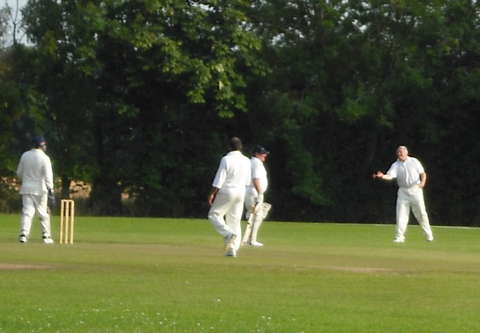 Sean Shannon shows how to do magic with a cricket ball!

Nevertheless, Chipping Norton had amassed a good score just over a hundred and the Denner XI were going to need to bat pretty well to take anything from the match.

Chris Tarratt and Richard Denner opened the batting.  I went out to umpire, camera in hand to take a few close ups.  It wasn't long before the Denner XI got off to a good start. 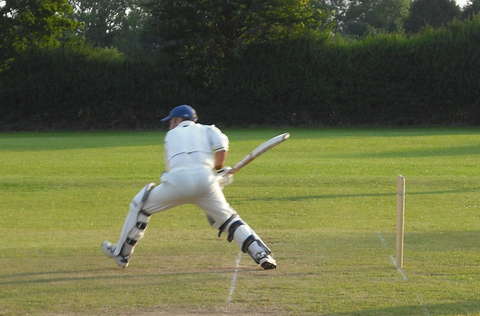 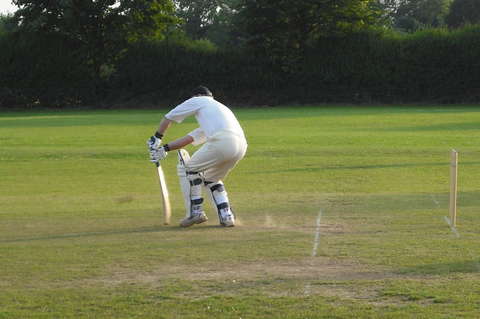 Number two Richard Denner comes down the track to get to the pitch. 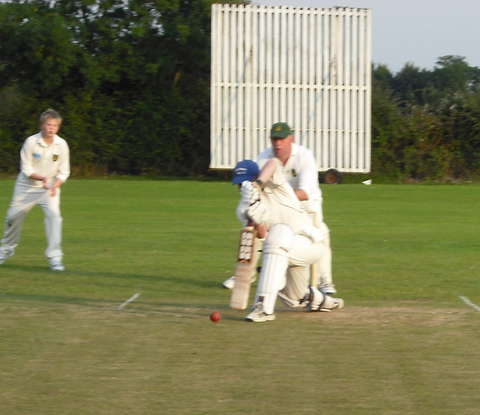 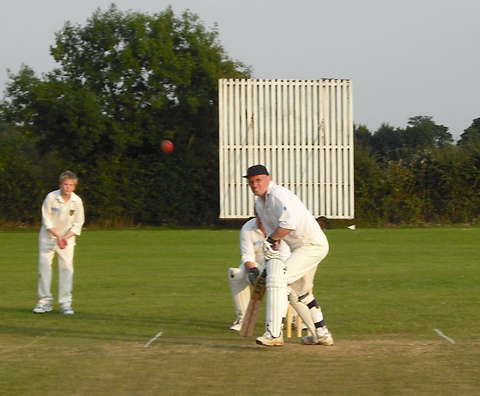 Richard Denner eyes up a floater.

After 5 overs the score had progressed rapidly to 33 for none and the signs were good.  Then at 40, both openers were both back in the hutch, with Chris Tarratt making and excellent 27 and Richard Denner adding support with 8.  It had been a splendid opening stand, but was this the start of a Denner XI collapse? 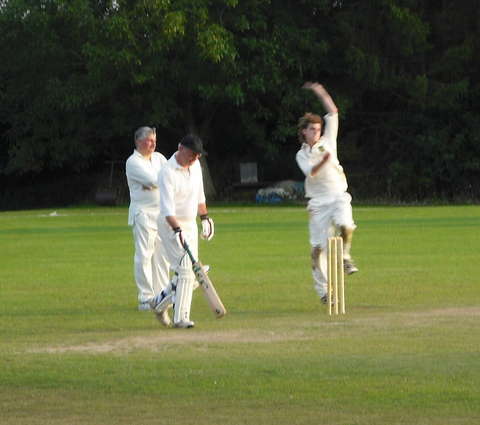 Richard looking to back up. 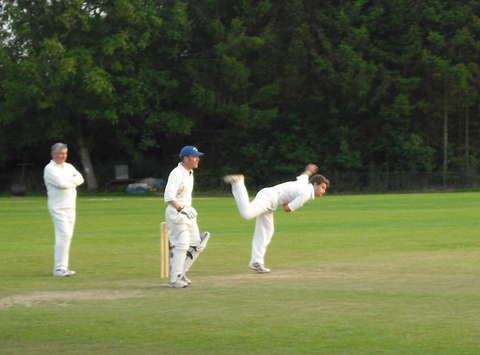 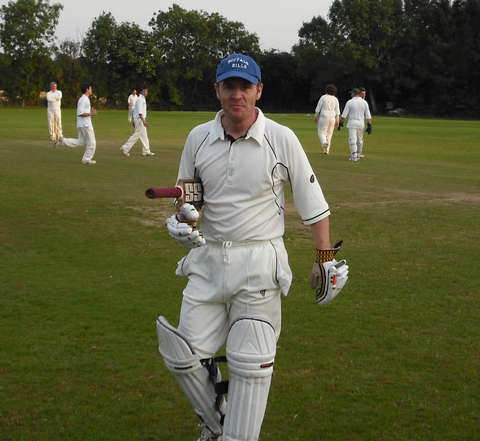 Chris Tarrat takes the walk after being adjudged LBW (not by me!) - but not before he had top scored with 27.

It was now up to Russel King and Dave Williams to take up the chase.  Earlier in the season, Russ scored almost 50 in a twenty20 including 3 sixes and a four in an over.  Today, after a gentle start he dominated the batting again. 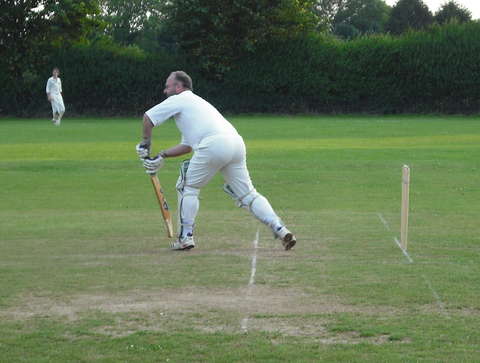 Russ King looks to defend a straight one. 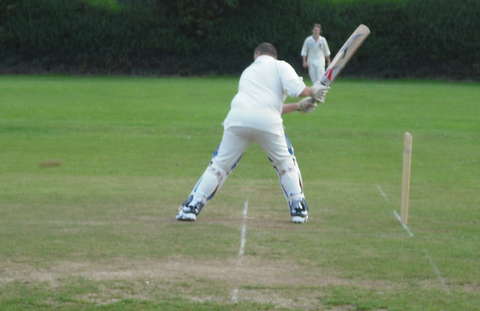 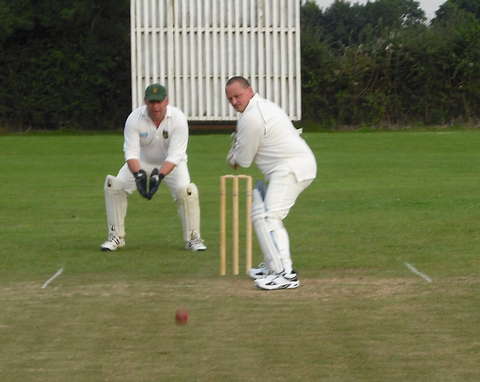 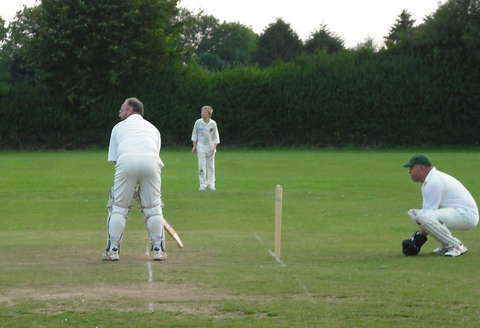 Russ King back on strike. 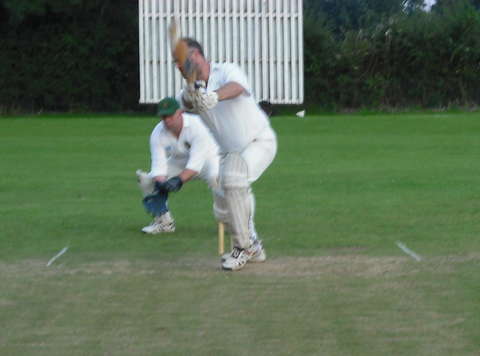 At 73 for 2 in the 14th over the signs were good and victory was in sight.  Then in the space of a few balls, four wickets fell and Denner XI were struggling at 75 for 6.  Russ departed caught for a fine 27, making him joint top scorer with Chris. 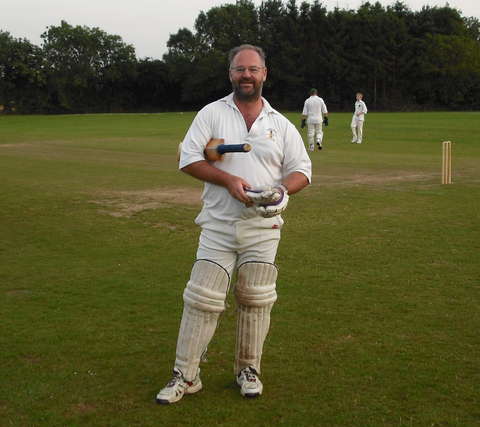 Russ King has been caught for a brilliant 27. 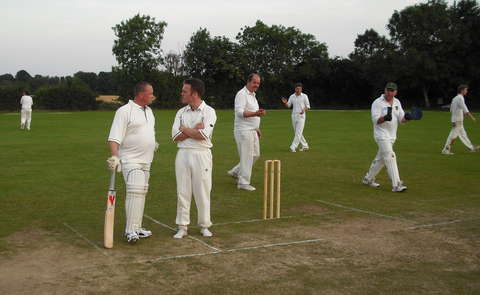 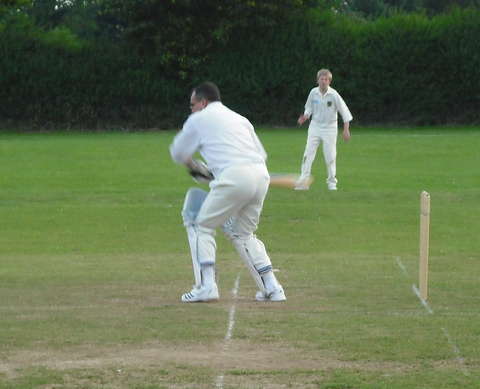 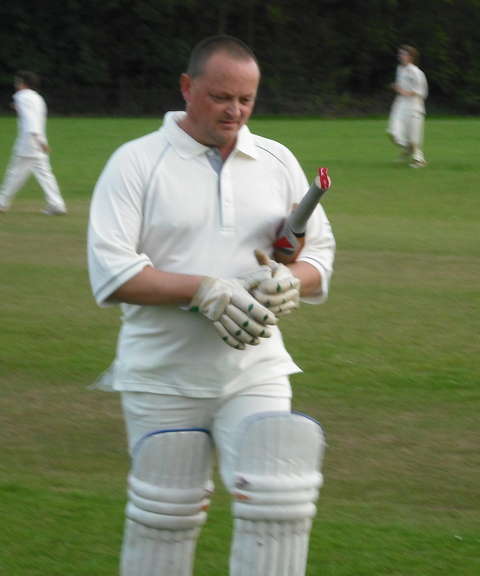 Dave Williams stay at the wicket is over.

By now Dave Williams, Dave Roach and P Shuter (who is that?) had all departed.  But all was not lost as Raj and Nokes Denner took up the challenge.  Run scoring was difficult, however they managed to keep the scoreboard ticking and they were helped by a young bowler who managed to bowl about six wides in an over.  Then Nokes was unfortunately run out at 88 for 7, with only a couple of overs to spare.  By now I had padded up and came in to join Raj.  I found myself on strike for most of the remaining deliveries and thanks to some more wides, a few ones and twos and finally a match winning boundary, the game was in the bag.  There were still four ball to spare and Denner XI had won by three wickets. 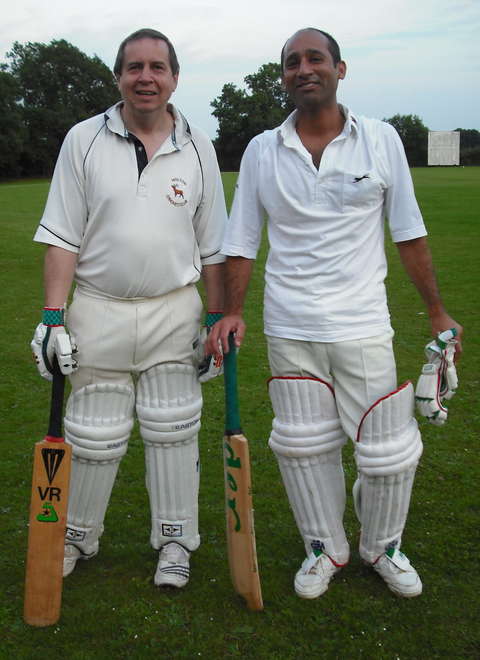